Summer is here. July is my birthday month, and I usually treat everyday of that month like my birthday. I ended June with ‘The Crispy Comedy Show” at the Universal Bar and Grill, with host Chris Putro. 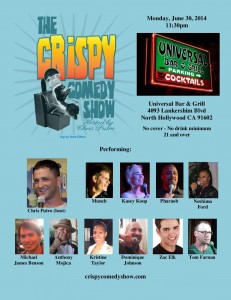 I was really happy to grab that booking. The show has great word of mouth among the comics. The Universal Bar and Grill is a dressed up dive. Kelly Anne the bar tender greets you with candy and a smile.

My Flapper’s show got pushed to July 16th, so that’s a something to look forward to. Tickets are $.99 for that show and I most certainly need to get people out for this one. So, do both of us a favor and come see that one if you’re in Burbank. I will be putting the word out for that show again real soon.

On June 19th, the Musical Improv group, that I co-produce, ‘One Night Only’, appeared once again at the Venice Art Crawl. My partner Sasha packed the house with her local friends. We took over the back room at the Canal Club and took Pacific Ave by storm!  We were to able assemble just the best cast of people for this event. We are interested in playing more gigs for sure in the coming future. So many fun places we can do this show.

I don’t really believe much in planetary shifts, like Mercury in Retrograde, and I’m happy to announce that we are officially ‘out of’ Retrograde for a few months starting yesterday.  I stumbled a few times this month. Shit was definitely off. I was off. People close to me were experiencing the same uneasy feelings.  Seems the one thing I was certain about, was how uncertain I felt.  Bad stuff didn’t happen or anything, just a general itchy feeling. I was more aware of it than usual.

I did book another commercial gig this month. I played a snobby waiter. That was fun.

I have surprises waiting for me next week. Happy 4th of July.  Be safe and don’t blow off any fingers. Watch after your poor pets on that day.