Happy Hump Month! It’s June, and we are approaching the halfway mark of 2014 already.  For most of the country the year is just beginning, because you can finally get out of the house without a surprise ice storm putting a damper on that picnic, at least for the next few months.

May was crazy-busy-filled with comedy! May also had travel back to the Midwest to see my family. Graduations, Birthdays and Dance recitals.  I taught some Improv while I was back, with the help of Tim Marks from KICK Comedy Theater. I also found an old model of a Star Wars Star Destroyer, that a friend gave me for when I moved from KC to Chicago. It was in my basement, unfinished, so I brought it upstairs, bought some supplies, assembled it and put some finish work on it.  Looks awesome. Thank you internet, for painting tips! 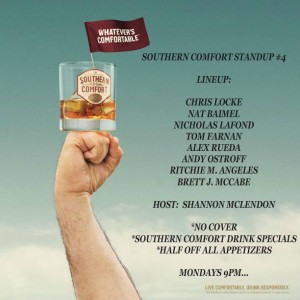 June is an important month, because a year ago, June 16th, 2013 I decreed a mission to attack comedy for a solid 90 days. I had a ton of fun. I learned a lot about myself. I regained some strength and confidence, especially when it came to writing. I’m not a writer, I’m a comedian I’d say. I’ve learned the hard way that the two constantly go hand in hand. I have managed to actually produce a couple of things that I have written in the past, but my process was all over the place. In fact I had no process. In fact fact, I honestly, believed  I could wing most of my career without etching it down for the next generation.  What an excellent way to NOT make my mark in a career I claim to be so deeply passionate about for, going on, a couple of decades now.

This month also marks ONE year of having a blog! Because, as I mentioned earlier, my decree…It was decreed right here in the very first blog.  Should be called a Slog. Because, again it goes back to my writing ‘discipline’.  The ways I had to talk myself into 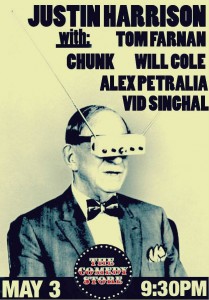 writing updates through those 90 days (which you should go back and read, if you haven’t!) The ways I’d talk myself out of writing it. The debate that my blog was my “Narci-Hubris” battling it out with my attempt at  “Transparethenticity”. I’m sure both ideals are clearly represented. Then, some friends dissed it, with the best of intentions of course. Then, I didn’t update the blog for a while. Then, I recommitted to writing it with fewer updates. Now, the blog has  become a monthly update for shows, a little story time, some opinion and to tell you to JOIN MY MAILING LIST! It now serves a modular purpose in my empire, now with a full service website!

What comes from it all is a body of work. It’s a journal. Isn’t that why it’s called a journal? Because it documents a Journey? Yes? no? Hello?

Blogging, which was my sisters idea(She mentioned it, didn’t lobby for it) changed the whole scope of the 90 day challenge. Because with it came some odd ideas. For example, I could try and raise money for charity at the same time, with pledges by actually logging the number of total minutes I did comedy over that 90 day period.  After very little deliberation, I vetoed that idea. Another time, maybe.

I made a lot of new great friends this past year.  Performed all over LA, whether anyone knew about it or not. Drank a lot of caffeine and alcohol. I discovered that generally, the youth think they’re old and they really don’t have much to say.  Misogyny is alive and well in stand-up, misdirected and unnecessary as it is. 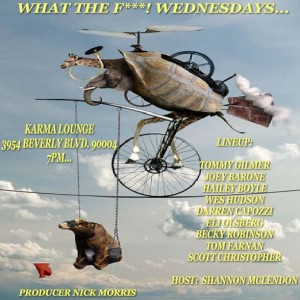 Nothing like watching a room full of female comics cringe, eye-roll and pretend “they didn’t just hear that” over and over again. And then these dopes wonder why they can get dates.

Here’s a funny story about perspective. I don’t recall having to work near as  hard getting people to come watch improv in Chicago as I do having to get people to come watch stand up in LA.  The truth is we busted our asses to get people to see shows! We had to cancel more shows than we wanted to. We did mailers and newsletters and poster hangings and word of mouth and those theaters had (still have) name recognition. It didn’t seem like hard work, because I was young, energetic, hungry. I had nothing invested but my time.  The synergy with improv and stand up was just beginning in the late 90’s-2000’s.  A few in the community split their focus to do both.  The only thing that’s changed is the delivery system. The internet blew up! And thank goodness, because the printing costs for posters and mailings alone would break me! I might have the energy to hang posters around a 3 block radius, but who wants to? I’m thrilled that after I finish writing this blog, I can save it, post it, tweet it. I don’t have to print 100 copies of it and shove it in your face to read. In fact I don’t have to worry about whether you read it at all. But of course, I want you to and I am always interested in constructive feedback and the sharing of ideas and PR hacks!

Speaking of which and this will be the end. BIG SHOWS in JUNE!