2014 looks like it’s gonna be a great one!  How do I know? Because I already have shows booked!  I’m thrilled!  You should be too.  Friday night is a good comedy night, so the last friday of the month I will be performing LIVE at The World Famous Comedy Store.  Read all about it in my newsletter (and don’t forget to subscribe). 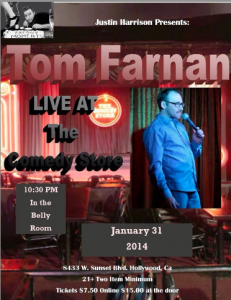 Friend, Comedian and rabid Broncos Fan Kym Kral booked me for this exciting night of comedy with, what I’m sure is, a stellar line up of LA’s rising comedy stars, and I’m included!  I’m humbled.

Getting a show, means building an act, which means back to the open mics to work the bits.  So back to MouthyPants and The BombShelter among others, to work it out.  It’s great kicking off the new years shows at these places.  Sir Whitney Melton (I knighted him just now) called me family, when he introduced me last Tuesday. That means a lot to me.

I don’t have a resolution for this year, but I do have a mission: To find my people.  To be cosmically positioned in the right place, time and mood with a group of like minded individuals ready to work with each other.  Easy enough….right?  My first lessons in comedy are all surrounded by group mind, letting the group decide and allowing my strengths to emerge from the group.  Doing this lone gun shit is new to me, very new to me.  It’s not like I haven’t assembled a cast before and made them say my lines and sing my songs, it’s just I haven’t done that in a long time and I’ve forgotten the process. Not THE creative process, but MY creative process.  In short, I need help. So do you. Then what are we waiting for?  For me, probably.  I’m the one that has to get this ball rolling. After all, it is my desire to have this.  Classically, I suck at getting that ball rolling and it takes me so much time to build up any decent momentum, but when I do, I’m unstoppable.  But that train moves slowly out of the station.  How do I upgrade myself to ‘lite-rail’ status?

I’m getting a lot of compliments about my mustache.  I don’t keep facial hair too long. The mustache is left-over from ‘Movember’. I was keeping it around for ‘Manuary’ but I don’t think anyone celebrates that one in LA.  Coulda been a Chicago thing.  I kept the mustache with hopes that I would book some Velvet Tom Shows during the holidays but alas.  Now, I’m just keeping it around as a niche look to book commercials, maybe.  Or I just don’t want to shave.

Enjoy a little webisode I voiced a few years back: